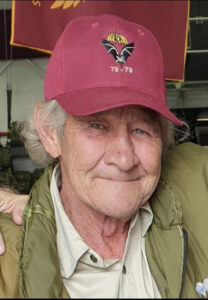 Dawid, or Davey, as we all knew him, was one of the three legendary Blaauw brothers who left such a deep imprint on the paratroopers of South Africa. He joined the Permanent Force in 1971 and following in the footsteps of his older brother, Hennie, he underwent officer training and then volunteered for the paratroops. He served for many years as an officer in 1 Parachute Battalion, South Africa’s premier airborne unit.

While still a young 2nd lieutenant, Dawid already showed his courage during a hand grenade exercise on the military training area of De Brug in the Free State. It was on 12 September 1974 and Dawid was a platoon commander in A Company, 1 Parachute Battalion. With six soldiers under instruction, he approached the safety-pit with its protective barrier of logs, where the troops primed their grenades.

On the command, “Throw!” given by Dawid, the troops lobbed their grenades at the target, watching them land as they had been taught before ducking for cover. Dawid counted the lethal objects as they landed, but only identified five. Then, to his left, he saw one of the soldiers running away. The man, having pulled the pin from his grenade, had let the explosive device fall; terrified, he was hightailing it away from the danger. The ticking grenade lay on the ground right next to the other troops.

Dawid yelled at the others to take cover and most of them did so with alacrity. But Rifleman Jordaan stood, transfixed, staring at the grenade that was on the point of exploding. Dawid did not hesitate for a moment. Diving at the frozen Jordaan, he knocked him headlong to the ground and then spread-eagled himself over the unfortunate soldier in an attempt to protect his head and body from the blast. Barely four seconds had passed since the grenade had been dropped! It was only a metre away from the two prostrate men when it exploded.

The bang of the detonating grenade was still ringing in the young officer’s ears when he realised that he had been hit in several places by bits of shrapnel, but that he was still alive. Not so, poor Jordaan. A tiny sliver of metal had passed just underneath Dawid’s arm and entered the side of the soldier’s chest, piercing his heart and killing him instantly. As the dust settled, Dawid picked himself gingerly and painfully off of the inert form. His heroic act had been in vain.

But for his courageous deed Lieutenant David Blaauw was awarded the Louw Wepener Medal (LWM) on 8 October 1975.

That was how I knew Davey. He was, like all of us, not without his shortcomings; but he had a quality that transcended any faults: when the mango hit the fan, he was prepared to lay his own life on the line to save yours.

He and I were company commanders together at 1 Para Bn in the late 1970s and early 1980s. Together, our companies rehearsed for a big airborne operation that was subsequently aborted as we were standing in the door of the aircraft. Together, our companies participated in follow-up operations and Fire Force operations as we ranged across hundreds of kilometres of isolated bush in Namibia. I remember despatching him and his company at night for an extended parachute operation deep inside Zambia. When they were deployed in Rhodesia, Dawid proved to be a brilliant Fire Force commander.

He was an enthusiastic and competent Bisley shottist and few people know that he successfully completed the Special Forces, or “Recce” selection. His battalion commander, however, would not approve his transfer to the Recces. In later years, he and I served together in HQ 44 Para Bde, where we worked closely, he as SO1 Training and me as SO1 Operations. And we parachuted together – both static line and free-fall. .

Dawid was generally a quiet, reserved man. But he always loved a good party and kept a set of civilian clothes in his standby kit, just in case the occasion arose! He was a colourful character and could endlessly frustrate his senior officers. Yet his soldiers loved him and would have followed him to hell and back.

I will never forget the way his brow would pucker until it looked like a knot in the middle of his forehead with a puzzled expression on his face when he was asked to explain something that had gone wrong. It was his way to gain a bit of time to come up with the most atrocious answer that left his questioner dumbfounded!

He was one of the powerful personalities of the paratrooper fraternity. His last years were difficult and he lived almost as a recluse. But over the past year he was “rediscovered” by some of the old paratroopers and they were able to ease his lot a little. But now, gnarled and weather-beaten from a lifetime of exposure to the elements, another giant cedar has fallen.