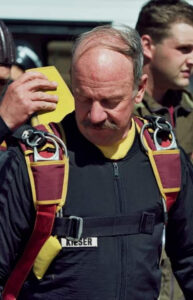 In 1960, as a twenty-year old corporal in the SA Armoured Corps, Johnny Kieser was one of 15 selected South Africans who were sent to England to train as paratroopers and then to return to establish South Africa’s first airborne unit. Under command of Cmdt WP Louw (later to become Chief of the South African Army) they were trained in basic and advanced parachuting techniques, the marking and manning of Dropping Zones, despatching of paratroopers and as parachute instructors.

Their course took place at No 1 Parachute Training School at RAF Abingdon in Oxfordshire. They trained for three months before returning to South Africa, where they converted Dakota aircraft for static-line parachuting, tested various parachute types and built the necessary parachute training apparatus in Tempe, Bloemfontein. On 1 April 1961 South Africa’s first airborne unit, 1 Parachute Battalion, came into being.

Johnny helped train the first paratroopers in the country and quickly became an instructor of note. He was instrumental in testing the new C-130 Hercules and later the C-160 Transall aircraft for parachuting when these were taken into service by the SA Air Force. He travelled abroad, studying military parachuting in countries such as Germany and France. In 1968 he was one of the first two members of the battalion to be trained in tactical military free-fall. Free-fall parachuting became one of the great loves of his life, and he went on to become a judge of civilian free-fall parachuting on an international level.

He also set the extremely high standard for military free-fall parachuting that was to be a hallmark of 1 Parachute Battalion. In 1977 he was one of the first South Africans to be trained in high altitude, low opening parachuting (HALO). When he reached the rank of Warrant Officer Class 1, he became the Regimental Sergeant-Major (RSM) of 2 SA Infantry Battalion Group in Walvis Bay. At 29, he was one of the youngest RSMs in the SA Army. But he was soon transferred back to 1 Parachute Battalion, where he served for seven years as the RSM, from 1970 to 1977.

In March 1991 the Bophuthatswana Defence Force (BDF) decided to establish a parachute school, and recruited Major Johnny Kieser to be its commander. He took early retirement from the SADF after 35 years’ service. Appointed in the rank of lieutenant colonel, he established the BDF Parachute Training Wing of the Military School. After running several courses there, he was integrated into the new SANDF after the elections of 1994. Appointed as Officer Commanding the Parachute Training Centre, now a unit in its own right as a part of 44 Parachute Brigade, Johnny oversaw the standardisation of parachuting between the various homeland armies and the SA Army as part of the new SANDF. He played a crucial role in ensuring that throughout the process of integration of forces, the technical side of parachute training in the new SANDF remained on the highest possible level.

But in 1999 Lt Col Kieser reached the magical age of 60. Retirement for a professional soldier was compulsory. He had devoted almost 44 years of his life to the military, most of that time having been spent directly involved in parachute training.

Johnny walked straight into a job with the Parachute Industries of Southern Africa (PISA). For the next ten years, he was something of a roving ambassador and test jumper for PISA. PISA was now able to openly market their products to the armed forces of many lands and Johnny travelled the world with them, demonstrating how their parachutes could be utilised from every conceivable type of military transport aircraft. He helped resolve technical problems in countries in the Far East, in South America, in Eastern Europe and in the Middle East and North Africa. Whether the issue involved static-line, free-fall or high-altitude parachuting, Johnny had the qualifications, the experience and the knowledge! And after resolving the problem, he would jump from the aircraft and with the parachute which the host country had experienced difficulties with. Such demonstrations invariably convinced even the greatest sceptic!

After retiring from PISA, Johnny joined Chute Systems, a Bloemfontein company offering world-class military training to countries throughout Africa and further afield. He assisted them with the parachute training that they undertook, and in this capacity was directly involved in the design and construction of a parachute school for the Namibian Defence Force. While working for Chute Systems, Johnny did his last parachute jump in Namibia. He was 74 years old at the time. Until then, he had been parachuting regularly, and during his parachuting career of 54 years he had carried out over 4,400 jumps. Considering that for most paratroopers 100 jumps is a lot, this says something about Johnny Kieser as a paratrooper.

Johnny was always the consummate gentleman. He treated others with respect and dignity, regardless of their rank, their race, their education, their social standing or their physical attributes. Humble, quiet and retiring, he never tried to hog the limelight. He was an intensely private person.

Physically, Johnny was a man of small stature. But in every other respect, he was a giant. His presence commanded respect. When that slight, dapper figure entered a room, people fell silent with awe or they stood up as a mark of respect. He exuded authority. And in the field of parachuting, few people were as authoritative as Johnny Kieser. His footprint in the training of South African paratroopers is an indelible one. Thousands of young men from many nationalities and backgrounds passed through his capable hands. He taught them to care for and to have confidence in their equipment, and more importantly, to believe in themselves. He will be remembered with affection and respect.